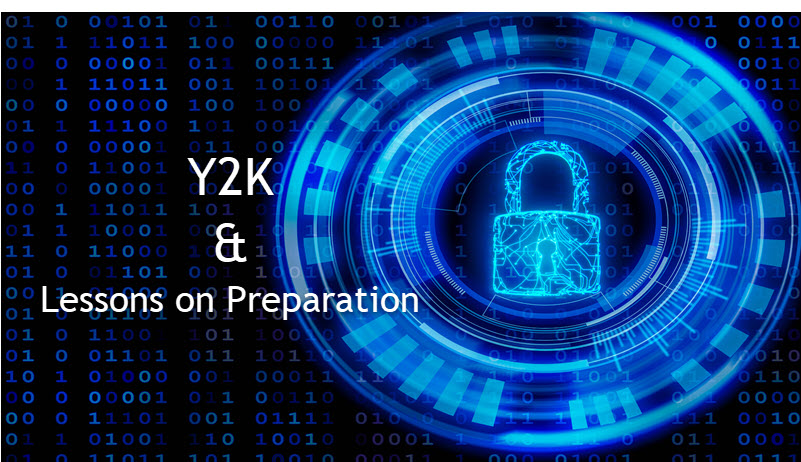 Brothers and Sisters in Christ,

There are myriad things occurring during this time of year. We begin with Advent; Christmas quickly follows; then we head into a New Year, and Epiphany.

With all this transition, one common theme makes its way into our thinking…preparation.

In my previous place of employment, I had the unenviable task of responding to customer inquiries and preparing company communication for the “Y2K” issues.

The Y2K issue was a set of circumstances in which the computers around the world, in every conceivable form of operation and function were set with a six-date parameter…mm/dd/yy (12/01/99 for example). It was widely feared that with the advent of the year 2000, operating systems around the world would fail because the computer hardware/software would not recognize the “2000s” century in the year portion of the mm/dd/yy parameter; resulting in global shutdown of anything and everything that relied on
computer operations of any kind.

A major portion of my job responsibilities was to confirm to customers that the equipment manufactured by my company would indeed “work” come January 1, 2000.

We, as well as many companies around the world, were preparing for something, but exactly what, no one really knew for sure. Most people had a reasonable view, but I did communicate with some that were sure disaster was going to strike.

Well, almost 20-years later, here we are, and nothing ever really happened.

As for the church, and us today, fast-forwarding 20 years as we prepare for these next two months, nothing changes. Throughout the next two months preparation is guiding light. We begin by preparing throughout the season of Advent for the arrival of the Christ Child into our lives; God becoming flesh, with a specific, intended purpose…Easter!

As Christmas finally arrives, we celebrate the birth of the newborn King, our Lord and Savior, Christ Jesus. In addition, we have busied ourselves with the holiday season and all the joy that comes from this time of year.

Upon the completion of Advent and Christmas, we reflect upon the year gone by, and try to prepare ourselves for the start of a new year, and trying, in some cases, to make preparation for a better year for ourselves through the auspices of our new year’s resolutions.

By the time January has come to an end. We reflect on all that has transpired during this two-month period and wonder just how we got through it all!

The most significant aspect for the church, and us today, when we say, “nothing changes”, is the realization that as we prepare for Advent-Christmas-Epiphany…God has already completed the work for which we prepare.

The Christ-Child found in the manger, has walked out of the empty tomb!

Thanks be to God!

Merry Christmas!
Happy New Year!
Peace be with you all!
Pastor Chris